It all happened one Sunday morning in 2015 before church. De’s daughter tried to wake her up when she was having her second stroke. Her daughter tried to get her mom up, putting her hands on De’s face asking “Mama, are you having another stroke?!” When De lethargically said “No, my head doesn’t even hurt” she said her daughter’s gut instinct told her otherwise.

Since this was De’s second stroke, she thought she knew the symptoms from her first one she had 10 years ago, but this one was different. She had no symptoms other than being extremely exhausted. De said “I was just so tired, I seriously couldn’t wake up.” But in the back part of her head, two clots the size of pencil erasers had formed and were blocking the blood flow to her brain.

At that point, De performed all of the stroke tests that she 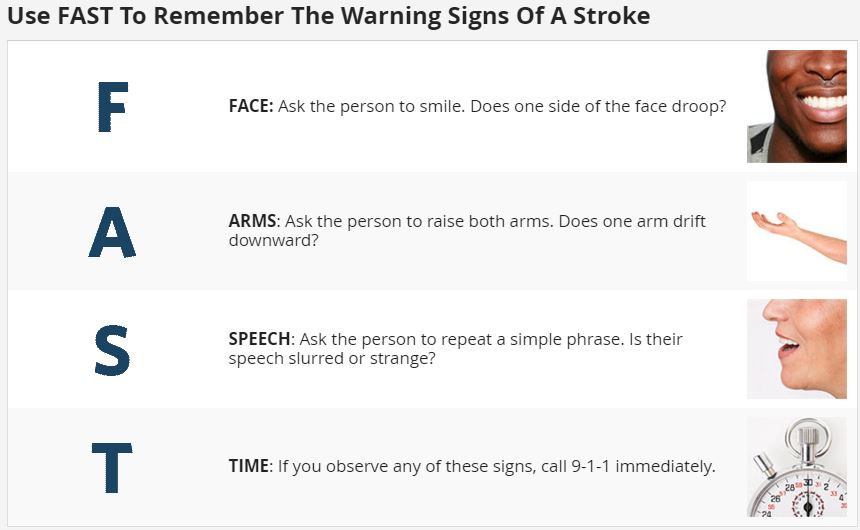 knew of. She raised her arms up equally with no sign of weakness.  Her daughter did notice that De’s mouth looked a little strange, but not droopy like pictures suggest. De experienced no numbness on her face like her previous stroke; she also had no slurred speech or headache.

De’s daughter took her mom to the hospital the next day (Monday), and thankfully she did. At that point, her head began to throb right above her left eyebrow. The doctors found the source of the stroke, gave her anti-clotting medicine, and observed her for 3 days.

After her stroke, De now says she is more in tune with her body. De says “If you feel weird and someone else notices it, get yourself to the hospital, because it’s better to be preventative, than too late and have major complications.” She also says “Trust your gut, when you think something is wrong, you are probably right.”

De says that her organizational skills have been compromised since her stroke and now goes to speech therapy. The good news is that this was a wake up call for her and she has gotten her diabetes, cholesterol, and blood pressure under control. She has done this by exercising regularly, eating healthier meals, being more mindful, and talking with her doctor for proper treatment plans.  She now swims 10 laps per day and also does some weight training to regain strength and endurance. De enjoys playing brain games, doing jigsaw puzzles and coloring, and it all keeps her mind sharp.

De also makes eating healthier a priority by preparing more meals at home and bringing her lunch to work instead of going out. She emphasized the importance of making quick and easy meals at home. One way she does this is by making food in bulk in the beginning of the week and enjoying it in various ways the rest of the week. For example, grilling more chicken than she would need and then being able to quickly make grilled chicken salad the next night, grilled chicken enchiladas another night, or grilled chicken on whole wheat pasta. While the grill is hot, might as way knock out a few other meals at the same time. Making healthy meals is important to De and she plans to stick to eating healthy to prevent further strokes.

Strokes cause many deaths per year. Eating well and being physically active can help you prevent a future stroke. Make sure you know the signs and symptoms of stroke and if you even question that you are having one, talk with your healthcare provider and follow their recommendations. Act FAST (Face, Arms, Speech and Time) and go to the nearest hospital or call the Stroke Help Line at 1-800-787-6537. Visit www.stroke.org for more resources.